Welcome back to my little corner of the internet!

In my last post we climbed the Mount Etna and looked into the bottomless pit of the South-Eastern crater. You can read about my adventure here.

From our hotel we walked past the theatre, Teatro Massimo Vincenzo Bellini, and to the main square, the Piazza del Duomo, with the famous Fountain of the Elephant, that features a black elephant made out of basalt and white marble. 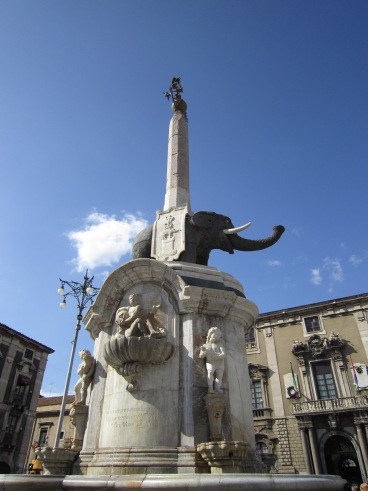 In the same square, you can find the Cathedral of Catania, but photos were not allowed inside, so that I won’t be able to show it to you. 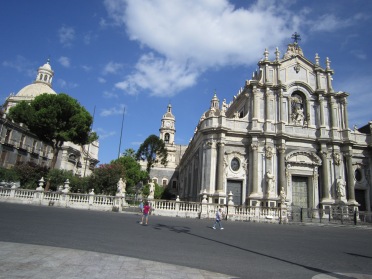 Another interesting fountain is just around the corner. The Fontana dell’Amenano‘s water flows looking like a sheet and there are several legends around this fountain and the impression it gives.

Not far, you can find the anfitheatre, but it is somewhat in the middle of a crowded street and a bit hard to access. It is the third biggest anfitheatre and well preserved. Obvisouly, it is built with lava, the cheapest and most used building material in the city. 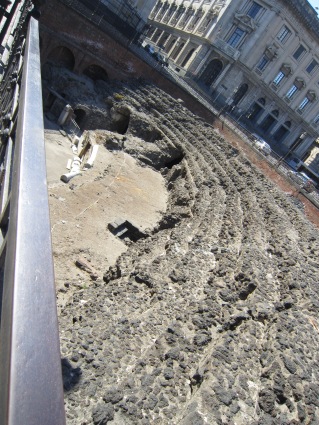 Close to the anfitheatre, you can stroll along the Via Etnea, a vibrant and elegant shopping street with several palazzi to gaze at.

For the history enthousiasts like myself, another fundamental stop is the Greek Theatre. It was used as housing ground in the dark ages and is now clutched in the middle of buildings. The interesting part of it, is that it is built on a natural spring to give the impression of being in the woods with the nymphs and the gods. Once again, it is built in lava stones.

The Benedictine Monastery in Catania was an impressive building. It was the biggest and most impressive monastery in Europe. It was still being built when the Etna erupted with the last big eruption that reached Catania and partially destroyed the city. You can still see the lava. It was abandoned after the eruption.

A similar fate bestowed the castle, next to the harbour. The lava reached the moat and, now that no more water is in the moat, you can see it clearly.

I particularly liked the contrast in colour on the buildings of the city: the bright white marble coexisting with the black lava or basalt.

In Catania, there are a few must-eat dishes. The most famous one is without doubt Pasta alla Norma. A pasta dish with fried aubergines (eggplants for the friends from the U.S.) and tomatoes.

Arancini are another fundamental element of local cuisine. Followed by fresh fish and mussels.

As for the sugar tooth, almond cookies and pastry are part of local tradition.

On the Etna, you can find wild mushrooms and herbs that make for great sauces for pasta and risotto.

Have you ever been to Catania? What were your thoughts? Let me know in the comments below.

One thought on “A trip to Sicily: Pt. 8 Catania”