Hello and first of all, let me humbly apologise for the very long absence. Somehow life came in the way of my blogging and I never really had the time I wanted to sit down and write. Let’s see if I can get myself to writing on a regular basis. Somewhat writing has a therapeutic effect on me, thus I should definitely do it more often..what do you think?

Maybe you know or remember that I went to Iran in October 2017 and it was wonderful. The whole country is so amazing and has such a rich and ancient culture and history, that the three weeks were over far too quick.

I thought of telling you about my trip here on the blog. 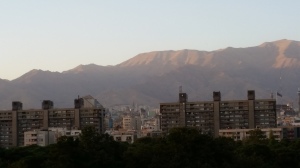 Let’s start from the very beginning. We arrived in Tehran after a sleepless night and a long wait for our connection flight in an Istanbul airport with a lot of Chinese tourists. The weirdest thing was when this middle aged Chinese couple started came far too close to where we were sitting and the wife unbuttoned her husband’s trousers and started wiping his butt with wet wipes. That was really strange. However, my Japanese husband, having been to China for a year, reassured me that this is perfectly normal behaviour…oh well..

We got on the plane and as soon as the flight attendant informed us that we were about to land, the Persian women on the plane started getting dressed. (In Iran women have to cover their head with a loose scarf and wear long sleeves and shirts that cover the hips). The funny part was that they were dressed like average Western women a few moments back and now they started looking more like the image we have in our heads of a Middle Eastern woman.

During the immigration it felt like anywhere else in the world with a bored clerk stamping your passport and mumbling something, without even looking up.

The astonishing thing was that the driver who was going to take us to the hotel made us get on a bus to reach the parking area and looked quite puzzled when we asked how much the ride was going to cost.

Now about driving in Iran, when we booked our trip, we were asked if we wanted to drive ourselves. However, since we were not familiar with the Iranian way of driving, we were warmly advised not to. As soon as we got in the car and on the road, we understood why. Persians have to be either incredibly bad drivers or incredibly good drivers. There are literally no rules that apply and the cars are far too close to one another, yet there seem to be less accidents than someone would expect.

The rest of the afternoon we spent finding places where we could change some money. (Unfortunately, you cannot use any Western credit cards in Iran nor can you change money back at home. This means that you have to bring all the money you are planning on using in cash and change it at the currency exchange spots). Back at the hotel, we decided to take a walk and look around a bit a have dinner, obviously.

Golestan Palace – the place of flowers and water

The following day, we were going to explore the city. Our first stop was at the Golestan Palace, the residence of the former Shah.

The entrance was already spectacular. A hall entirely covered with mirrors. We were told that this was not actually intentional, at first. The Shah had commissioned a decent shipment from Europe, but some mirrors arrived broken. So, instead of throwing away the mirrors, they decided to break them into small pieces and glue them as if they were tiles composing a mosaic. 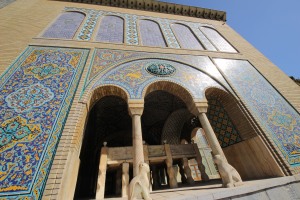 After a brief – read long – stop at the national museum, we ventured into the Great Bazaar, where people force us to drink a very traditional and must-drink drink: Saffron water. I must say that it was a tad too sweet for my taste and the excited people around me must have been a bit let down, when I did not want to have a second glass.

We had a delicious lunch with our guide in a hidden restaurant, only for locals, where the menu was ONLY in Persian and we went off to the next stop: the Treasury. 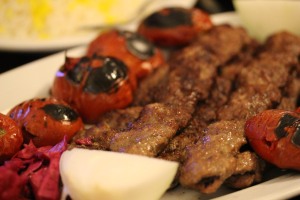 For that, you had to leave all your belongings behind and were not allowed to carry anything with you, no phone, no earrings, no jewelry. So alas, I do not have any footage, but after passing several security checks and entering several highly secured doors, we ended up in a room that held more diamonds and jewels than I had ever laid my eyes on. In fact, they had so much, that the diamonds were just piled up. The value of what was in that single room would be enough to easily end world poverty and social inequality. Featuring jewelled swords, a throne completely covered in massive gold and jewels, a part of the personal jewels of the Shah’s wife and much much more. While writing this, I have shivers going down my spine, just thinking of the accumulated wealth the Shah must have had.

Going solo on the subway

However, we had to go back to reality and back to the hotel. There we decided to venture on the Tehrani subway and visit the Tabiat bridge. Maybe I should add that we were not able to read any Persian and we literally followed the instructions from the hotel with the printed name of the stations we had to get on, change train and get off. Needless to say that as soon as we got on the train, people approached us, welcoming us to Iran and asking us where we were from. Now, I am a naturally suspicious person, which means that any stranger approaching me, automatically makes me suspect the worst. And, furthermore, I am not used to people welcoming me anywhere.

On our way back, it was rush hour, which meant the level of a Tokyo subway, lest the silence. There people actually talk while being far too close to one another. We realised that there was quite some agitation going on around us and my mom and I immediately thought that, being female, maybe we were not supposed to be in that coach. At some point, a man asked my mom how old she was, and upon her answer I’m 70”. The agitation got to a whole new level. A school girl was forced to get up and my mom was literally forced to sit down. Apparently the crowd wouldn’t have it that a poor elderly lady had to stand in a crowded train. They seemed utterly shocked when she explained that no one had ever gotten up for her in her life.

Back at the hotel, we decided to walk all the way to a restaurant we had been told was incredibly good..and, oh boy, were they right! 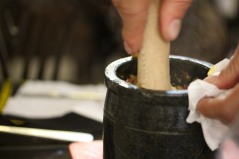 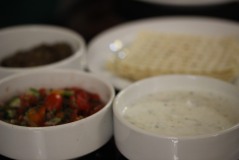 Then we hurried to bed, since we had an early plane to catch the next morning, not without the personnel from the hotel knocking on our door with a “small” breakfast for us. This included maybe 100 pieces of naan, a lot of milk, yoghurt, dates and jams. Truth be told, we did not managed to finish all of that food in those 3 weeks.

This is it for the first stop of our Iranian adventure. Let me know, if you have ever been there and how your experience was. Make sure to check out the next one to follow our adventure!

One thought on “Two days in Tehran”