My husband has been claiming dumplings for some time now..so he got the job of folding them!

Jiaozi can be found all over China. They are served at any time of the day. As a matter of fact, my husband told me that some days he ate them for breakfast, lunch and dinner.

I have tried to find the difference between wonton and Jiaozi. As far as I could figure out, with my husband’s language skills, Jiaozi can also be fried and steamed. They are the equivalent of the Japanese Gyoza. Whereas wonton are mostly boiled or steamed and often served in a soup.

These are Chinese jiaozi, like the ones he used to eat when studying in Beijing. They were fantastic!

For the recipe, I used chicken mince instead of pork and took frozen jiaozi dough, instead of making it myself…

Start by missing the meat with the soy sauce, half of the salt, sesame oil and vinegar. Leave to rest for about 15 minutes. Mix the cabbage with the remaining salt, ginger, spring onions and pepper.

Now combine the cabbage and the meat and mix well. Bring a large casserole with water to the boil. In each wan tan, place 1 tsp of filling and fold in half, by creating a wave where you close it. Wet the edges with a bit of water to prevent from opening again.

Boil the wan tan for 2 minutes and serve hot with Jiaozi sauce. 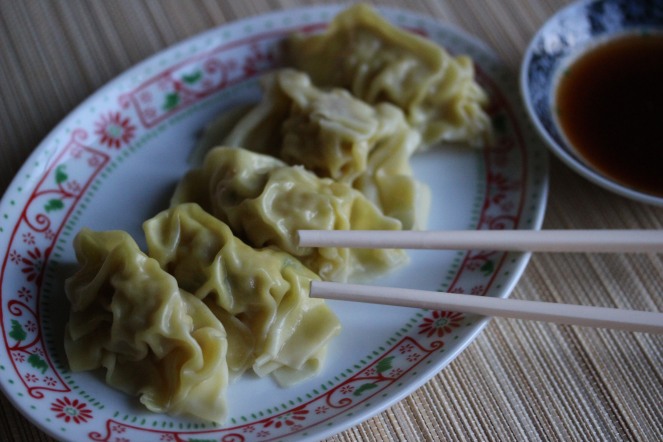 You can enjoy the jiaozi even the following day. Just heat them up or fry them in a bit of oil.

There are countless shapes and fillings for jiaozi. Which one is your favourite?